In my imagination Iceland is some strange combination of futuristic and old worldly qualities that breeds an amazing culture, current economic disaster aside. If I'm wrong don't tell me for I haven't a need for more places that aren't cool. I'm looking at you, Ohio. The speculation on Iceland is not irreverent though, as the artist I'm sharing today is a son of the island nation. Ólafur Arnalds makes some of the most beautiful of Iceland's famed ethereal sounds. A natural comparison is Sigur Rós, who has grown on me in recent times. Nevertheless, I do enjoy Mr. Arnalds far more and his latest release, Dyad 1909, is simply extraordinary. He's got your chamber stings, your creepy robotic voices, your strange song titles, and some soothingly calm piano blended with chaotic electronic racket. The man is a mad wizard, and I think my class is only bolstered by how much Icelandic looks like spell-casting to an asshole like me.
To be had here: 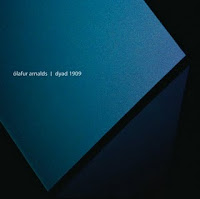