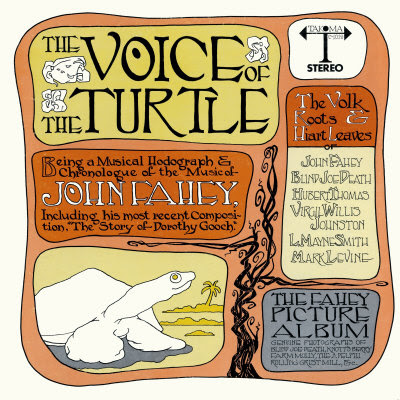 John Fahey was a pioneer in the solo use of the steel-stringed guitar. He is a legend in modern folk music, although he denied that is what he played, citing his suburban roots. I'm not gonna get into too many details about Fahey's style and work, as I am not a musician nor an enthomusicologist. It must suffice to say that I find his albums enthralling examples of folk and blues that he was not shy about experimenting with. The Voice of the Turtle has some of my favorite songs that he played like "Lewisdale Blues" and "Je ne me suis reveillais matin pas en May." There is a bit of all sorts of instruments on this album, and some singing that is damned close to yodeling in its long drawls. Somethings the songs are slow and distorted to the point that they remind me of beginning to drone tracks only to shift smoothly into acoustic guitar playing and back again. Fahey was surely a wonder-maker.