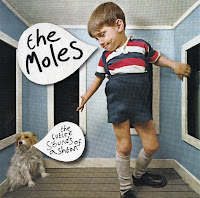 Sent to me from the United Kingdom, The Future Sounds of Ashton is a brilliantly produced psychedelic rock album. Really one of the higher quality productions I've ever had submitted to the blog. The songs are anything but repetitive with the group really flexing their creative muscles that carries to sound nearly to punk rock and then back to tracks that remind me of David Bowie's Hunky Dory. The member, Brinley Davies, that submitted the album told me they were influenced by Bill Fay, Pete Dello and Jimmy Campbell. None these cats are familiar to me so I've been launched down a rabbit hole. The band is in the processing of changing labels and recording a new album that hopefully we won't have to wait too long to hear. The album was sent to me in FLAC but I converted it to mp3 to use on the iPhone so I'll provide a link to each medium. I'd like to give Brinley the last word on what he thinks the album is: "For me the album is a collection of isolated moments in time, a bit like a diary. In my head I see it as a psychiatric pop record, rather than psychedelic."