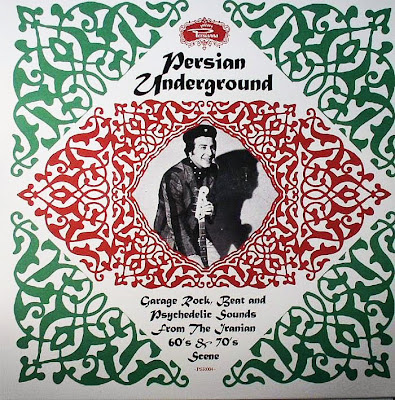 I'm being somewhat lazy today. I have a stack of submitted albums to listen to yet this heat and my wretched mood from unemployment has resulted in me just relying on someone else to write up some music for me to hear. Off the fantastic blog ghost-capital, I found this glorius compilation of Iranian songs that don't at all fit the mold of how the country is currently thought of. Naturally, most any form of popular music out of Iran is relatively rare because of the nature of the government there, but there was a time before such austerity. Like most of the world at some point or another, Iran was far from immune from garage rock and psychedelia. Now it wouldn't be surprising if I fawned over how lovely and rare these tracks are, but really in these days of the internet, analog-to-digital conversion, and enabling of selective tastes it truly was only a matter of time until this compilation was made. This shouldn't in any way diminish how great the songs are, both the originals and covers. I must've listened to Zangoleah's "Wish Map" at least a dozen times in two days. Hats off to ghost-capital for posting this up and all the other amazing things on that blog and here's to hoping people don't quit making collections like this.

To be had here:
Persian Underground: Garage Rock, Beat and Psychedelic Sounds from The Iranian 60's & 70's Scene [320 kbps]
Posted by Antarktikos at 9:59 PM