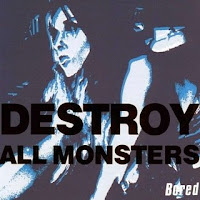 Destroy All Monsters is a band I should've had up here a long time ago. Many will be familiar with the band due to Thurston Moore issuing a large compilation of their songs in the 1994, and since there has been several more new live and studio albums released. What makes Destroy All Monsters a big deal is that it was a cutting edge sound when the band played shows in the mid-70s and how it was embraced by members of Southeast Michigan's rock and roll notables, such as members of MC5 and the Stooges joining their ranks. American post-punk of the late 70s and 80s has some considerable roots in acts like this, using unconventional insturmentation like vacuum cleaners and what have you along with the unrefined style of composition. While Bored isn't that wild if compared to other shit I've heard, the connection of Destroy All Monsters and Sonic Youth or fellow Ann Arbor band Half Japanese are undeniable. The singer, Niagara, and Jad Fair have an eerily similar cadence to their vocals. For a band that never released a proper album in their original stint nor got too much popularity outside of North American and Japanese experimental rock fans, it did have a disproportionate impact. Bored is a good starting off point as it is rather easily digestible and much stranger music of the band can be sought afterward.
To be had here:
Destroy All Monsters - Bored [192 kbps]
Posted by Antarktikos at 12:59 PM