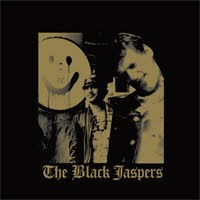 As I suggested I might, this is another project from one my favorites, King Khan. Instead of being with fellow Montreal musicians Mark Sultan or Bloodshot Bill, this is with Jasper Hood of Moorat Fingers. It is quintessentially what Khan is all about, punk made lo-fi as all fuck with silly lyrics. I'll be the first to admit though that this isn't nearly a catchy or well done as the King Khan & BBQ Show albums nor is it as conceptually curious as Tandoori Knights. However, all this is a bit more expected once informed that this album was actually recorded in 2001. Apparently King Khan just held on to without releasing the Black Jaspers for years but finally felt that 2009 was the year to do so. Thus the more primitive sound the reminds one of a very stripped down Spaceshits makes more sense. Boy howdy, did I ever go link heavy here. Anyhow, hope this tickles your fancy.
To be had here:
The Black Jaspers - The Black Jaspers [192 kbps]
Posted by Antarktikos at 9:44 AM