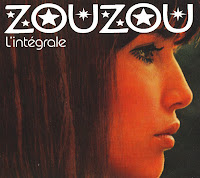 It's been a real long time since any French pop has appeared here. Truly overdue as I do enjoy the sweet songs of the yé-yé girls and 60s chanson. Zouzou is the stage name of Danièle Ciarlet who was born in French Algeria in 1943. Zouzou was one of seemingly dozens of young French women that had multifaceted careers as actresses, models and singers not terribly unlike modern American pop stars in that way. However, unlike the music of modern pop stars, this seemed to have a more artistic flare to it over the mostly showmanship of what passed nowadays. The obvious differentiation was in how chanson was about making songs for the French language rather than English which was the lingua franca of popular music, as it remains. Though some wrote more of their own songs than others. The yé-yé girls like Françoise Hardy, Sylvie Vartan, and France Gall were the starlets of their day they dated famous singers and actors, such as Zouzou involvement with Brain Jones of the Rolling Stones. Time didn't treat them all the equally though and Zouzou is a particularly unfortunate example of an unhappy decline through drug addiction and accompanying legal issues. L'intégrale is a compilation of her songs spanning from 1966 to 2003, and thus the mood and style varies considerably. Overall a very appealing songs despite a rather unpleasant biography.