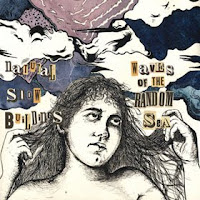 Natural Snow Buildings, I think I had misplaced them in my mind for some time. I think when the blog was younger I had a real heavy post-rock phase and I found Natural Snow Buildings and listened to repeatedly several releases. Well, in this snowbound suburban morning I see that they've release a new album and it is reminding me so eloquently why this band was so mesmerizing. Far less daunting to undertake than The Dance of the Moon and the Sun with only six tracks on Waves Of The Random Sea, admittedly though they're damn long for the most part. The French duo of Mehdi Ameziane and Solange Gularte really demonstrate how droning, avant-garde post-rock can be masterfully done. The epically long tracks take their time in building and evolving the sound, but this is where much the enjoyment can be derived. The lengthiness gives me time to get lost in the music and really relax in a way the is best done with a cup of tea and window to aimlessly stare out of. If you're willing to take the time for it this album is outstanding.
To be had here:
Natural Snow Buildings - Waves Of The Random Sea [256 VBR kbps]
Posted by Antarktikos at 10:14 AM