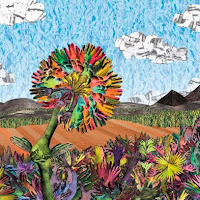 I have long debated posting Parts & Labor as I was a fan of since Stay Afraid came out back in 2006, but I just seemed to put it off until now as I have a brand new album to go off about. Constant Future, however, it is somewhat of a change from their previous sound. The band continues to make noisy, electronic infused, indie rock, but the mood seems to have altered most through the use of more subdued singing. The new style is nearly the choir-like sort of singing used by bands like Le Loup. Not that folksy or quaint though, still rather fuzzed out and capable of getting heavier for spurts. The shift away from the Coachwhips/Deerhoof/Lightning Bolt sharpness is a well executed move, as they're sound fresh but familiar is a way not many bands can pull off. Constant Future reminds me of These Are Powers or Oneida, which is never a bad thing.
To be had here:
Parts & Labor - Constant Future [320 kbps]

Posted by Antarktikos at 9:57 AM