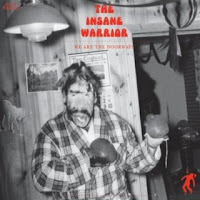 We Are the Doorways is a bombastic and eclectic album done under the new alter-ego of the famed hip hop musician and producer RJD2. He seems to be describing The Insane Warrior as an alternative version of himself where instead of making largely instrumental hip hop the approach is more from sci-fi-esque electronic music that could double as a soundtrack to a real wild flick. Pretty bizarre and intensely exciting I find this is a captivating album that I frankly like more than most of his recent albums released under his usual moniker. So if you like strange electronica, whether a fan of RJD2's other work or not, the Insane Warrior should be worth a try. Now only if they'd finally get to remaking Flash Gordon then we'd really have a project for this persona.
To be had here:
The Insane Warrior - We Are the Doorways [256 VBR kbps]
Posted by Antarktikos at 9:55 AM