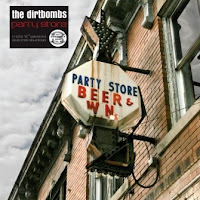 I got this album because of my love of Mick Collins and I assumed that with the Dirtbombs it could range from noisy garage to R&B. I underestimated the range that they'd attempt with Party Store for sure. Collins is involved in several bands of which the Dirtbombs is perhaps the most rock focused, so imagine my surprise to realize Party Store is a tribute to Detroit's history in the innovation of techno music. However, they do so with guitars, drums and keyboards in a manner that makes the music seem like spaced out rock more than techno. Now, from what I understand Collins does resent his position has a rock and roll hero because of his involvement in the Gories and the effect it had upon garage rock in Detroit and beyond. Yet Party Store seems to confirm to me that he can even make techno feel like garage, or at least krautrock. The Metrotimes did a good article on the album. You can also hear a good, albeit slightly dated, interview of Collins and Ben Blackwell from the Sound of Young America.
To be had here
The Dirtbombs - Party Store [320 kbps]
Posted by Antarktikos at 11:42 AM