The Citradels - A Night Of Contemporary Feedback Music (2015) 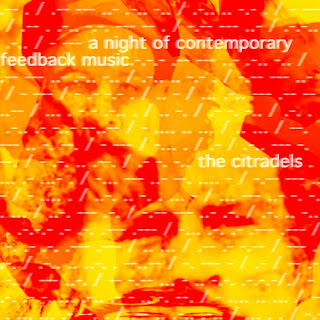 I've made reference to my now living in the city of Hamtramck, MI. It's a unique town and really only for bizarre historical reasons not part of Detroit, which completely surrounds it. It's status as separate city isn't the most bizarre part about it. It's dense, more so than any of the city's suburbs and even much of the city proper, packed with immigrants, cheap hipsters and a lingering breed of poor blue collar folks who worked in the automotive factories. All stacked up in these duplexes with children playing in the streets, Arabic radio blasting through windows, calls to prayer, and bars loaded with rock and roll. The drive bars deserve special mention, they're seemingly unstuck in time, still hosting the Polish speaking old men that used to be common here, selling small drafts for $1.75 and a television mounted to the wall in 1985. I spend my evening yesterday wandering around this town full of ethnic grocery stores, holes-in-wall, and fashion retailers it is hard to imagine still existing while hearing the retro-styled psychedelia of Melbourne's The Citradels. It was pleasantly surreal to say the least.

Hopefully some of you are familiar with this group, as I've written up three of their albums before, most recently last year's Nepenthe. Everything I have heard from them bears the same seed of retro-rock, heavily focused in late 1960s psychedelic and incorporating elements of drone, shoegaze and psych-pop that came in later years. A Night Of Contemporary Feedback Music is not exception, in fact that explicitly cite 1968 in the introduction track. Without having gotten a chance to dip back into their whole catalog, I do feel this new album has created a fresh sound despite how the seem to keep in similar genesis of atmospheric throw-back in the others. Moreover, the second half has tracks like "Dear Ivy" and "Pretty Smooth, Ey " that're excellent fuzzy pop songs. Then there's the non-Western instruments such as the Armenian Duduk, Balalaika, Pungi, Djembe and most noticeably the Sitar providing the experimental and mystic sound that made early psychedelia so distinctive. Finally, when you download this check out the nicknames they've given themselves, they're all great but hats off to coining "Coolerbreeze Cloverstream."

To be had here:
The Citradels -  A Night Of Contemporary Feedback Music
Posted by Antarktikos at 8:55 AM