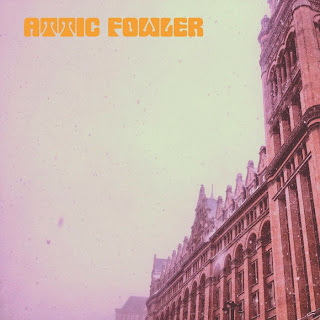 It seems it won't ever warm up in the in the Midwestern United States this year. It lightly snowed in late April, a phenomenon I've seen all my life yet everyone seems shocked and appalled at it's occurrence. However, I am starting to get on board with this outspoken disbelief as I'm sitting my barely 50°F apartment in mid-May. The Milwaukee musician known as Attic Fowler will most likely be able to relate to this unseasonably brisk spring experience from across Lake Michigan.


Despite the colder temperatures here, I'm unwilling to yield in my attempts to adopt summertime activities, in which sitting on my modest balcony and having a drink while I try to winnow down the backlog of submitted albums. And while the sun still saw fit to shine some warming rays on me I got to throughly enjoy the shimmering dream pop of Attic Fowler's City Hall. Fitting neatly between fuzzy psych-pop, jangle pop and abstract folk, he's hit upon a well-engineering sound for porch musing. There's even wind chimes introducing the tracks "My Mountain House" and "My Mtn House," and yes those are two different versions of a song curiously back to back in the middle of the album. Can't get more spot on than a strangely echoing version of what you just heard speaking of blissful notion such as mountain home in Tennessee (I think that is that word he's saying at least). It's very much the sort of album to hear from start to finish, allowing the varying sound to carry you through most pleasant journey. Nevertheless, look out for how awesome he songs "Shadowing," "Day Dreamer" and most especially "Tieppertien." Boy howdy, I love that "Tieppertien." The real gem that song is I have a feeling this is the sort of album that repeated listening will yield new favorites.

City Hall has been released via Fall Break Records, based in Athens, GA like the just previously posted Arnold Fish album from G.O.D. Records. Naturally we cannot be surprised that the ever-musically active Athens is issuing so many excellent records so be sure to check out the other Fall Break releases I've gotten a chance to write up.

To be had here:
Attic Fowler - City Hall
Posted by Antarktikos at 11:15 PM