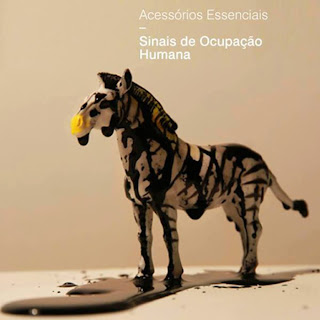 I love Brazilian music and if I had more time and energy I'd devote much more of this blog to writing up all the great music coming out of the Latin American powerhouse. That said, I wish I had a more expansive knowledge of Brazilian bands to reference whenever I want to share one. I can't imagine it means much to group from Rio De Janeiro to be compared to Os Mutantes or Gal Costa. That'd be like saying an English band is like the Rolling Stones or the Beatles. So I'm gonna resist the easy out, and when you're telling all your friends about this great album try to do the same. And you just might wanna do that.

Acessórios Essenciais are indeed from Rio De Janeiro. They music is acoustically based and relies heavily on dual singing from a singer of each gender. The songs are kinda strange, of the sort that if it was an North American band I'd call it freak folk or new weird america, for while the acoustic guitar and vocals are the core there's plenty of uncommon and sporadic instrumentation to be heard on Sinais de Ocupação Humana. They've sprinkled in sounds of cymbal crashing, horns murmuring, maracas and tambourines rattling along with any manner of whistling. While it can appear as a cacophonous arrangement at first, the inconsistency really makes the album more memorable and enjoyable than it'd otherwise be. Maybe my favorite song at the moment is bit more conventional "Bike da Babi" but he seems to say "welcome to Mississippi" toward the end and I found that adorable.

Thanks again to my friend Barbara for sending me this great Brazilian album, which if we're all lucky won't be the last.

To be had here:
Acessórios Essenciais - Sinais de Ocupação Humana
Posted by Antarktikos at 6:12 PM