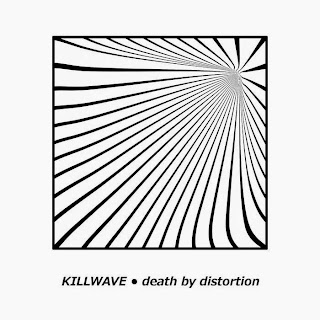 It is neat to hear how genres pile upon one another as time becomes compressed with the benefit (or disadvantage depending to one's desires and philosophies) of retrospection. This chronometric warping does allow for redevelopment of ideas to take place in interesting ways. A nice example is the aptly named Death by Distortion by Killwave.

The dudes in Killwave are familiar with a great deal of 80s British new wave. It's evident in throughout Death By Distortion, down to the vocals that seem to have taken on a mild accent, albeit not clearly a British one, but surely not what I know most Chicagoans to sound like either. Furthermore, Killwave isn't strictly a new wave band, they're a good deal heavier. They've woven in industrial rawness, metal guitar progressions and the vocals smack of what I've always thought of as horror punk. The lyrics vary from bizarre to comedic to mildly creepy, mostly encompassing all three at once in some degree. Basically, there's a whole lot going on here and whole lot of it is excellent. A very well-produced album, the effort the put in their irreverence is apparent and laudable.

To be had here:
Killwave - Death By Distortion

Posted by Antarktikos at 6:50 PM