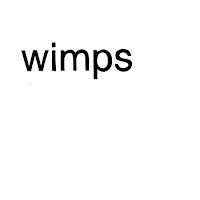 I've been working at a place run by people who were a part of the Olympia music scene when it was in it's prime. Subsequently, much of the music played at work is music from K Records, as well as other Olympia label, Kill Rock Stars(a lot of nostalgia in these guys). Beat Happening, Karp, Bikini Kill, Heaven's To Betsy, godheadSilo… the list goes on… I'd say that over the past 6 years I've had this job, when I'm not being tortured with 50 Cent or The Carpenters, that I've listened to, mostly, music from Olympia or the Pacific Northwest in general.

Which is why it's hard to not put Seattle punk rock 3-piece, Wimps, into that context. Their music harkens a little to California skate punk of the 80's, but mostly to Olympia's riot grrrl/punk scene of the 90's. I hear a lot of The Frumpies in what the Wimps do, and a lot of it has to do with Rachel Ratner's vocal delivery, which is reminiscent of both Tobi Vail (Bikini Kill/Frumpies) and Selene Vigil (7 Year Bitch). Their music also brings to mind Carrie Brownstein's pre-Sleater-Kinney band, Excuse 17.

While Wimps have that sound, it doesn't mean that it's derivative. I think a lot of that early Olympia stuff doesn't hold up very well over time, the youthfulness of it exposing it's own naivety. What the Wimps do sounds like it's coming from a place that's much more sure of itself. All 5 songs on their demo are good, solid songs, and I can't wait to see them when they open for The Mallard in a couple weeks.