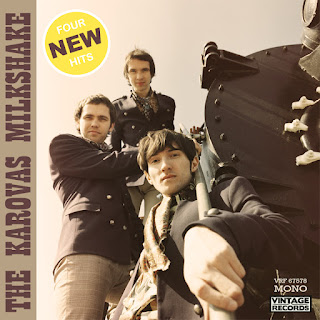 Interesting to note how this retro thing has seeped from it's music and fashion stronghold and into the roots of something resembling a movement. Urban gardening, homebirths, naturopathic medicine, the resurgence of vinyl ... 30 somethings with handlebar mustaches wearing suspenders and fedoras and shit... Even smartphone apps that make pictures look like they've been weathered by decades of sunlight...

It's as if we can only embrace progress by balancing it with antiquity.

This most recent garage revival seems symptomatic of this greater turn of the head towards the past. Mexico has a scene, several European countries (especially France) have great garage scenes. I don't know why I was so surprised to hear of a garage band from Russia.

The Karovas Milkshake are from the city of Ekaterinberg in Russia which, from my brief scan of the city's wikipedia entry, is between the size of Phoenix and San Diego, has a monument of Michael (Mikhail?) Jackson, and is a hotbed for Russian rock bands. When a friend first played The Karovas for me, he insisted they were actually from the 1960's. While this didn't turn out to be true, I can see how a passive glance at any picture of them and listening to this ep could be deceiving. They have the sound down, they have the look down. The production of the record, even, sounds authentically 60's. It's really quite remarkable and their songs are catchy as hell. Shades of The Kinks, The Sonics, and The Velvet Underground are all present.

4 songs. Don't let this one get away ...Luckily, my links are still working(for now), though I agree with Antarktikos that an alternative will eventually have to be found.

Posted by Amazing Larry at 5:33 PM