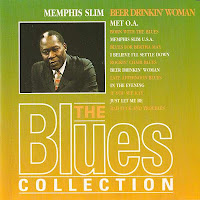 Won't ever get over the blues. certainly not when it seems I've got some genuine reasons to have the blues lately. More important than my most recent hangups is this wonderful Dutch-released compilation of tracks by Memphis Slim. True to his moniker the man was born in Memphis, Tennessee and began his recording career way back in 1947 and maintained it thru into shortly before his death in 1988. He was a piano bluesman who played a sub-genre called jump blues. Although often accompanied by band that included a variety instruments, these songs are minimal, featuring little more than piano, harmonica and Slim's powerful crooning voice. He throws out a bunch of mentions to the blues figures that were influential in his career like Leory Carr and Big Bronzy Bill who are both totally worth checking out.