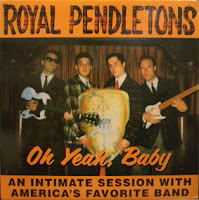 The Royal Pendletons are one of many bands that garage rock musician King Louie Bankston has been involved with. In fact he was a founder of the Royal Pendletons in 1991, who went on to put out a 7" on Goner Records and then this full-length on influential Sympathy for the Record Industry. I highlight King Louie Bankston has he's still out there making music with numerous bands over the years, including the Persuaders, the Exploding Hearts, King Louie's Missing Monuments, which I admittedly know little about. Hopefully I'll fix that soon enough. However, I've had Oh Yeah, Baby for years and periodically go back to listen to it. Each time I am happily reminded how stripped-down and upbeat this group was. There are instrumental tracks along with ones that prominently feature rather comical lyrics, but all of them are heavy on the organ and guitar. If the album art wasn't an indication enough tell you, it all possesses a large nostalgic element. Throws back to popular 60s garage rock and surf but maintains a healthy degree of modern saltiness and punk. A rather enjoyable album for garage fans who like things like the Compulsive Gamblers, Thee Oh Sees, or anything Billy Childish touched.
To be had here:
Royal Pendletons - Oh Yeah, Baby [160 VBR kbps]
Posted by Antarktikos at 2:06 PM