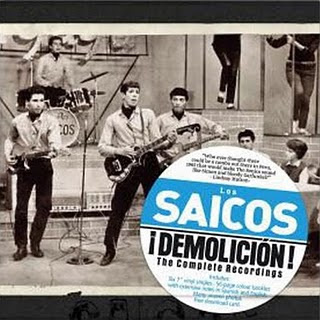 This is a compilation of the singles done by Los Saicos in the 1960s. Coming out of Peru, Los Saicos were on the cutting edge of the garage rock sound of the age, which is all the more remarkable as I read they were aware of the louder, surf-inspired bands of North America or Europe. Rather they likely began with the same raw materials as their counterparts (British Invasion and surf music) and quickly began making wildly lo-fi rock. The songs are written in Spanish, but I am sure they're not easily understood by anyone because of the intensity of the reverb and lo-fi recording techniques. Moreover, the tracks are originals unlike some other non-English garage rockers of the time, such as Les Napoleons. I was blown away at how amazing these guys sound, and you'd hardly be able to place them as a 60s band if you compare them to modern garage rock. Their guitars are awesome and they've got organ on here that really wails. I wish I'd heard of these cats sooner.
To be had here:
Los Saicos - ¡Demolición!: The Complete Recordings [192 kbps]
Posted by Antarktikos at 4:02 PM