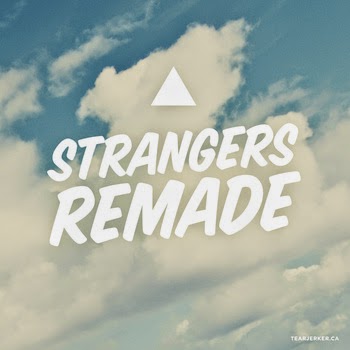 A few months ago I posted Strangers by Toronto's Tearjerker. It was a lovely, spacey, ambient-touched collection of songs. It's since become a fairly regular part of my weekly listening rotation, so you may understand that I was pretty jazzed to see that their is a "remade" version of it for free on bandcamp. I've never heard of the term "remade" used for something like this, but it is perhaps a better choice than the more common "remix" term. The songs in essence remain the same, but their sound is tweaked, with something added here or there like instrumentation, effects, or even sampling of obscure spoken word. All this is skillfully done to the point where I can't even choose which version I prefer and have listened to both back to back a few times. Additionally, the tracklist is reversed, with the final track of Stranger's, "Slip Away," beginning this release and so on. As a fan of hearing albums in their entirety and from beginning to end, this was a brilliant twist. Finally, just a note on the detail, if you're listening to the album in a program or on a player that displays album art, you'll see that each track has a unique picture.

To be had here:
Tearjerker - Strangers Remade
Posted by Antarktikos at 2:22 PM