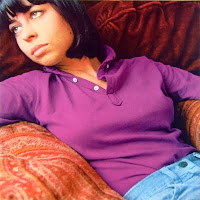 I'm stuck on Brazilian music, if you haven't picked that up yet. Perhaps a phase that I'll revisit from time to time in the future, such as my fluxing interest in Finnish avant-garde. However, for now I'm gonna load this blog up with all the Brazilian greats I missed out on being raised in Anglophone America. Nara Leão is just such the artist that can undeniably be considered a great, in fact I read that her 1950s household jam sessions are sometimes cited as a birthplace of bossa nova music. She didn't rest with being on the forefront of one musical advent, as she joined the Tropicália movement in the 1960s. I stress again I haven't any Portuguese language skills, nevertheless I find her voice mesmerizing. You can be sure I'll be hunting down lyrical translations when it is slow at work this week. Anyhow, not as wild and psychedelic as Os Mutantes, but as skillful and lovely. Lastly, while the music might not feel as radical, the songs were written best Tropicália had to offer like Caetano Veloso, Gilberto Gil and Chico Buarque.
To be had here:
Nara Leão - Nara Leão (Lindonéia) [320 kbps]
Posted by Antarktikos at 5:40 PM