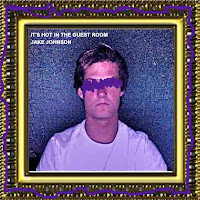 The is a Californian musician that comes from the same area as Ty Segall and the Moonhearts in Orange County. He sent me his album to check and share with everybody probably a month ago, but I'm finally doing to it. It is lo-fi rock and roll; I'd say garage but not really heavily punk. While I am aware that making lo-fi productions are by definition anything but the highest quality, this album doesn't embrace that as much as I might've hoped. I mean I want these tracks to pop out and punch my ear drums, but as it is they may be a little flat. Nevertheless, Mr. Johnson shows some true potential to make some great rock and roll, and the songs are rather good. In particular I like "(I'm) Out Of My Mind" and "I Don't Want You." I've already marked down for the next garage rock cassette I make for my walkman. I bet he sounds pretty sweet live, and with any luck he'll capture it in successive releases. Do give him a listen and let me know what you think though.