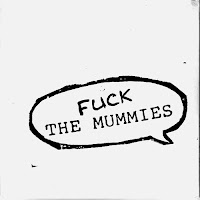 "The once and future kings of budget rock." I read that on allmusic year ago and thought it a bold statement, but after listening to the Mummies in the years hence, I'd be inclined to agree. I also gathered that their so vehemently lo-fi that they resist CD releases, though not completely as my long ago post of Never Been Caught attests to, along with a few others. Fuck the Mummies is bootleg disc that compiles some amazing garage rock recordings, including a version of "Land of 1000 Dances." You might recall the Gories on Complete Bandin' Sessions did a cover of that too, which if heard back to back can put me a state of bliss instantly. And get this shit, the second to last track is an entire live set done for a radio station. What more could one ask for? Basically, if you're not down with the Mummies yet you need to be.
To be had here:
The Mummies - Fuck the Mummies [192 kbps]
Posted by Antarktikos at 10:08 AM