Took a bit of a break cause it was my birthday and I wanted to drink beer and listen to music without thinking about how to write it up. However, isolation can get real boring as well. I have some singles and EPs sitting about that I feel like putting up today.
To be had here:

Naturally awesome as most everything Mick Collins touches is. "Kick Me" and the b-side "The Crunch" as lo-fi rock and roll of the sorts that made me really come to love the Dirtbombs in the first place. 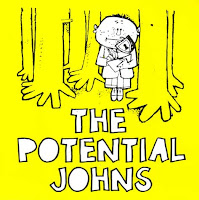 This is largely because somebody complained that I was putting up a bunch of garage rock and lo-fi shit and their favorite band, the Potential Johns, wasn't among what I'd picked. Well, truth be told they're not the easiest band to find but they are good garage punk.

I was given the heads up on this act by the fella from Liquid Skulls. While I've enjoyed the times I listened through it I have been lazy about posting it up. Eerie, droning, post-punk that both gives me joy and the willies. This EP is available for free or name your price on bandcamp. 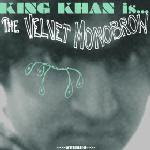 Apologies for the shitty bitrate, but this single gets me all worked up. I've seen this tagged all sorts of ways, but I am pretty sure this is a solo single by King Khan. Despite the title of the release, the songs are "Ain't It Sad" and "Never Enough," with the former being the sappiest song may have ever done. Reminds me intensely of Lou Reed and that is about the best thing I can ever say about anything.
Posted by Antarktikos at 12:51 PM