The Whiskey Predicament - Escape From the Meat Market (2014) 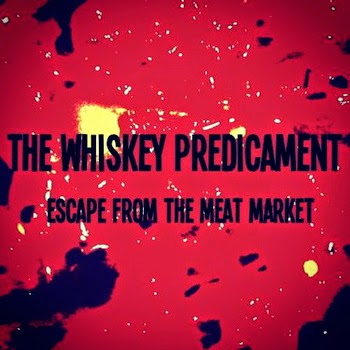 Charlotte's The Whiskey Predicament is an excellent name for a band. Resonates acutely with my personal relationship with the brown liquid, namely that I like to drink it but it never turns out to be a good choice. It's lovely yet troublesome, like most women I find myself attracted to and the sentiments of a good folk song. And while I'd still call Escape From the Meat Market a folk album, it isn't the stripped down sort. In fact, it's more along the lines of full sounding garage-folk artists like the Strange Boys, Dead Ghosts, or even Bloodshot Bill. While acoustic guitar makes the centerpiece of the songs, there's so much going on from organs, horns, harmonica and hard to identify yet rather cool squealing.

I received this album in the inbox a bit ago and I have been steadily listening to it ever since. However, as shit goes I haven't gotten a good chance to sit down and spout off about it. Business as usual there, but I do get little tingle of guilt whenever I would hear it and know I should get to saying something about it. Though I was enjoying it too much to stop listening. Found the entirity of the album quite appealing, with the tracks "The Architect Song," "Better Than Before" and "Don't Look Back" begin among the highlights for me.

To be had here:
The Whiskey Predicament - Escape From the Meat Market
Posted by Antarktikos at 3:47 PM