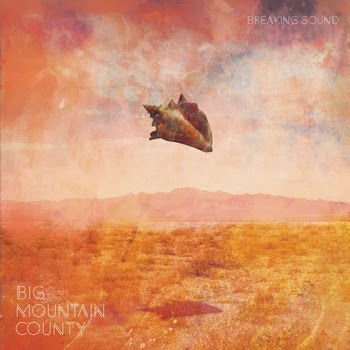 The series of returning artists has yet to let up, keeping on track with Big Mountain County issuing a full-length album to follow up a set of singles and seven inch releases. In fact if you remember the self-titled 7" from a Grab Bag a bit ago, you'll already be familiar with a few of the tracks on Breaking Sound. That said, I'm gonna spout off about it some more. As I do.

Big Mountain County are from Rome, Italy but in a common form for Continental European psych and garage rock outfits they sing in English and take heavy influence from British and North American bands from the 1960s and onwards. They share this with recently the posted Madcaps and Max Mayall Fine. It's as I've had explained to be, English is the language of rock and roll and that's isn't changing. Indeed, listening to B.M.C. provides a good argument that nothing is wrong with this arrangement.

The sound of B.M.C. is quite heavily into the psychedelic, with guitars the are abstract and droning all the while the deep voiced singer belts out in a definitive style. The organ also plays a prominent role in the songs, giving the album a very retro feeling at times and providing much of the dynamic of my track of the songs "1945." At times dreamy and others energized into garage rock, this artful distorted record is great for this spring's sunshine and my desire to blast loud music for the neighbors to hear.

To be had here:
B.M.C. Big Mountain County - Breaking Sound
Posted by Antarktikos at 3:11 PM