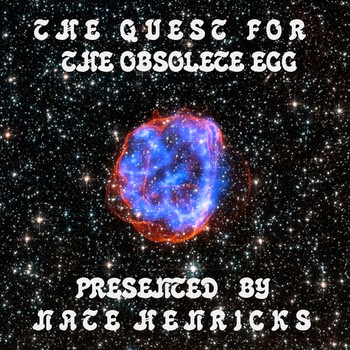 As I'm sure you may imagine I get large amount of musical material sent in for write-ups. This is something I encourage, but it doesn't seem to be fully randomly how the come in, at least from my point of view. I'll get a bunch of emails from folks I've never heard of, then one after another it will be returning musicians in an absolute shower of happy reoccurrence. This is my way of saying we have a series of previously featured musicians upcoming, starting with the notable Nate Henricks. This dude has been often praised by me for reasons that'll be clear to anyone that listens to any of his albums, not least of all the newest among them, Quest for the Obsolete Egg.

If is possible to comprehend I do believe our dear Mr. Henricks got even a bit farther out with this album. It bears similarities to the tracks "Your Arcade Prize (Live from Times Square)" and "Vegetarian Dog (Live in Tokyo)" from the prior album, Apple Juice, insomuch that it has an effected lo-fi quality to the vocals and an echoey facet that serves for choir-style backing. Obviously he does many weird things throughout like a spoken word list joke and some most erratic instrumentation. Naturally, these aren't gimmicks but the strange brilliance of Nate Henricks style of recording psychedelic bedroom pop.

Also, if you're not aware this is only one of many albums put out by this prolific man currently dwelling is Lawrence, Kansas. Do take the time to check out others. They never disappoint.

To be had here:
Nate Henricks - Quest for the Obsolete Egg
Posted by Antarktikos at 8:45 PM