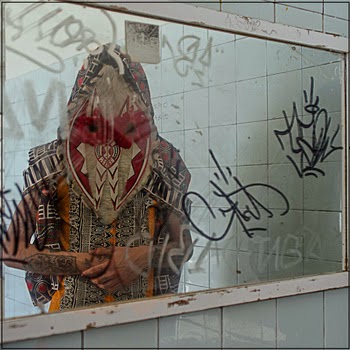 As promised the return of another artist that I highly, and I still believe rightly, praised. This time the Madrid-based extreme lo-fi garage rocker known a King Cayman. Although he's got more work out there, the only other album I've written up by this dude was last years Dream. The core of King Cayman's style has carried over into Mirror's Carnival, which specifically is an very intense lo-fi punk sound complete with harsh, growling vocals. Although those vocals bear an adorable Spanish accent. But truly, it is fast, loud and trashy in a way that makes me think of the King Khan & BBQ Show, Ty Segall or Jon Spencer's Blues Explosion in overdrive, even perhaps Jon Spencer's work with Pussy Galore mightn't measure up to quite how blown up King Cayman is aiming for. That said, it isn't all off the rails, he does take time to make more drawn out, though no less fuzzy and weird, tracks such as "Hole."

Also, when you download the whole album from the bandcamp it comes with a series of bonus tracks. Six in all, two of which were recorded in Venice and four from a basement of some place called Pad Pend's basement. These songs are all fucking totally great and worth your trouble.

To be had here:
King Cayman - Mirror's Carnival
Posted by Antarktikos at 7:34 PM