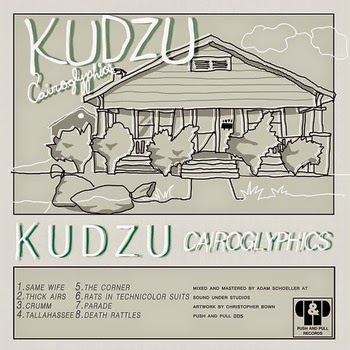 Springfield, Missouri's Kudzu are now out with a full-length effort after providing us with a glimpse of their potential in last year's EP. And, yes, before you wonder too long this is the band that's the sister band of the most righteous garage rock outfit, the Gorlons. Their memberships overlap as does the penchant for fine lo-fi songwriting. However, Kudzu makes songs that are more aptly called post-punk, though they're rather nebulous to categorize overall. Perhaps the best comparisons other far to place bands like Cretin Stompers or The Dictaphone, though these are not analogs. The tone of Cairoglyphics is kinda eerie and surreal, the songs being heavily washed out and psychedelic to brilliant effect. And let's get it straight, these are fucking outrageously good these songs. It bears the marks of being a hard to exhaust album, those which repeated listenings will reveal another of the tracks as being your new favorite. At this moment I'm really digging on "Thick Airs" and "Crumm" but I am certain that'll shift soon enough.

Finally, not sure if I ever mentioned it but I have a cat named Cairo, so the album name Carioglyphics summons the image of that fat, furry dude writing down picture words. Now I'm gonna be thinking about that as "Death Rattles" plays in my head all day...

To be had here:
Kudzu - Cairoglyphics