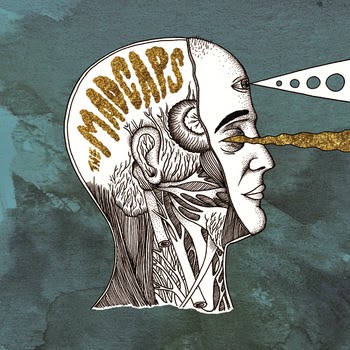 Listening to garage rock in the springtime is a fine thing. It is time to start sorting out some summer songs for all those hot hours to be spent drinking beer on the balcony or sweltering in a car, stuck in the inevitable construction traffic jams that are part of life in Michigan. In fact I've already begun playing the Madcaps at my job and annoyingly asking my coworkers to guess where they're from. Answer is France, which they didn't guess by the way. Yet that isn't surprising as the Madcaps sing in English and their garage pop style could just as easily have come from California, Ontario or South Africa. Garage rock is an international affair after all and France happens makes some of the very best.

Nevertheless, the Madcaps have gone a bit farther toward being American-esque, for this garage is leaning heavily toward popular music of the 60s and a slew of references in the lyrics to high school, jukeboxes and girl's named Shelly. I mean, I suppose that could all happen in Rennes but more likely they're fans of pop culture of which the United States has been exporting for decades. Yet, the most important part of any album is most obviously whether the songs are any good. It is here the Madcaps have shown themselves to be masterful songwriters of retro garage pop. This must be one of the most positively catchy albums I've gotten to hear this year so far. Additionally, these rocking Frenchmen appeared on SRM a bit back with a likewise self-titled EP, both of which were released by the most righteous garage and psychedelic Parisian label Howlin' Banana Records.