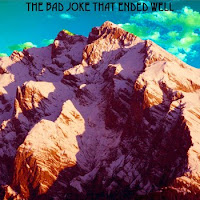 Burger Records, one of my favorite record labels in the bizz today, is putting out a tape each day this month. They take enough of my money as is, but their release schedule does speak volumes about the health of small record labels in the US heading into 2013. No, not a single band on the label is going to get huge and make millions, but people are out their buying garage and psychedelic rock. Thank goodness for that.

The Bad Joke that Ended Well is not on Burger Records, and they are not from California, but they do play some pretty awesome garage rock. These Bristol lads have a new vinyl record out on Stolen Body Records, and there is a lot to like here. Lots of organ mixed to the front of the recording, and a vocalist that sounds as if he has sung along to The Sonics more than once in his life. Thus far, my favorite track off the album has been Hold My Hand. If this is a love song, it is one of the most drunken, embittered ones in creation.