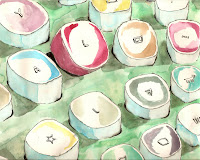 The new album by those Texan math/noise rockers, YALL. Features their earlier released single, GUM. It's a blissfully frantic affair to listen to this album for the first time, this is natural with most noisy rock. Moreover, these song sound incredibly lo-fidelity. Thus it mashes everything into a sonic paste. However, it becomes less cacophonous with repeated listens and assumes the invigorating mode the musicians intended. Admittedly, some of the tracks are far more toward math rock, such as the magnificently quick angular guitar playing in "Blastocyst" demostrates. I gotta say I liked the whole damn thing though, and I bet you will to you like any of their other releases. Available for download from the band's own mediafire upload.
To be had here:
YALL - They'll Sya We're Only Dreaming [320 kbps]
Posted by Antarktikos at 7:10 PM