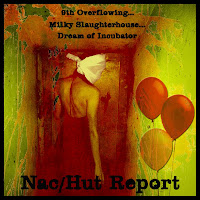 I want to begin by apologizing to bands that send me their stuff and I don't get around to it. I have a ton of music they I have already downloaded and listen to, new stuff that I just found, and get many albums sent to me by bands looking for some exposure. If I miss it is because of the volume of files I haven't got time to listen through, but I'd like help with this if there is anyone eager to post on the blog about the many albums submitted for sharing. The reason I bring this up is that NacHut Report is just such a group that has offer their album for free distribution on the internet. My eye got caught immediately by last.fm considering my follow, though currently defunct, co-writer Warren's music, Foxes in Fiction. The e-mail they sent me related that they are a Polish-Italian band and this is their first full-length album. It is certainly in the experimental vein, but that isn't giving too much detail. It has a bit of a noise/sound art feel to it but maintains a rather steady and enjoyable beat to it. Similar praise as the previously posted album, though this one has vocals it is they are hardly the sort the is gonna shake you out of concentration while nonetheless being handsomely done. Overall, it possesses a very modern tone to the album that is refreshing.
To be had here:
NacHut Report - 9th Overflowing...Milky Slaughterhouse...Dream Of Incubator [128 kbps]
Posted by Antarktikos at 8:15 AM