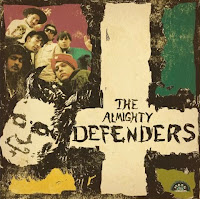 Earlier this month I shared King Khan & the Shrines, so I won't give the story on who he is again. I will tell you that he and his current bandmate, Mark Sultan who is BBQ in the King Khan and BBQ Show, have been up to some collaborating. In this case with the members of the Black Lips while holing up with Khan in Berlin. Basically a garage rock jam session branded as a band. Though I think it was fully recorded it the studio, it has the roughness of a live recording. This is made all the better in that a main source of inspiration seems to be gospel, which is naturally meant to be preformed live. It certainly possesses a feeling of nostalgic reflection on the earlier period of rock music, when the influence of soul and gospel were readily apparent. This album isn't as fast-paced and jazzy as Khan's work with the shrines, but does feel very close to the most recent album with BBQ.
To be had here:
The Almighty Defenders - The Almighty Defenders [192 kbps]
Posted by Antarktikos at 8:13 AM