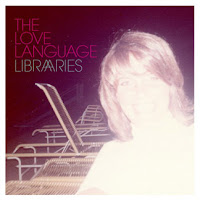 Good news is I have the new album by The Love Language to share. Bad news is that I can't locate it anywhere in a bit rate better than 128 kbps. So we'll have to make do with what is available until people find some higher quality conversions. For those of you that might've missed it, this is the second release by the North Carolina band masterminded by Stu McLamb. The first album has some mighty powerful lo-fi tracks on it and this follow-up seems to be along a very similar vein. If anything it apparently was produced with more resources, mostly evidenced in the instrumental flourishes sprinkled throughout. Nonetheless, it maintains the lo-fi pop/rock songwriting that made the previous effort so endearing, though it lacks a standout, fast-paced track like "Lalita" was. A solid if not superior effort that should be treated like candy, enjoyed in moderate doses to avoid ruining it for yourself.
To be had here:
The Love Language - Libraries [128 kbps]
Posted by Antarktikos at 7:28 PM