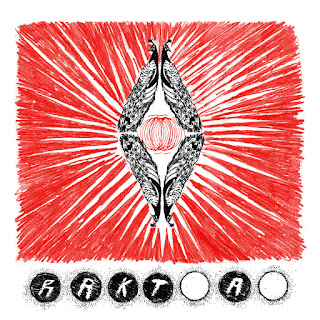 I always thought it was interesting how birds are often named after their own songs. Killdeer, Godwits, Curlews, Bobwhites... the list is extensive. If bands were named after their own songs, I think G'n'R would be renamed "Eye-Eye-Eye" and Metallica would be called simply "AH!", because singer James Hetfield ends nearly every line of lyrics with a sharp blast of "-ah!" (ex. "Everywhere I roam-Ah!", "Harvester of Sorrow-AH!", etc.)

Rakta, a Brazilian band, wouldn't have to change their name at all. They have an initial sounds that encapsulates surf drum neats, the buzzing 2-chord dirge of grunge, and vocals sung from within a psychedelic cave. But as these songs progress, I would hesitate to categorize them into any new school of mishmash garage-punk-psych-surf. Their sound is just as much, if not more, an echo of early 80s UK goth rock. Siouxsie And The Banshees, Bauhaus, and New Order all come to mind.

Actually very similar to the modern UK band Savages, but without the edge-y post punk feel.

Rakta's dark streak slices down the middle of this self-titled, 6 song EP, while never dampening the energy of the music.