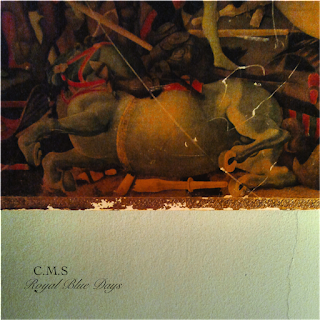 The newest album from the folk/anti-folk musician C.M. Slenko, also called Charlie Slenko. Last year Slenko had a double release in September, issuing both a full length Rented Rooms and an EP Moonlight Veneration. The former being a wonderful example of melancholy contemporary folk music and the latter being a far noisier and psychedelic experimentation. These two modes he was simultaneously exploring then have now found a near equal expression in Royal Blue Days. Tracks such as "Pale Moon," "Short Circuit, Long Night...," and "Kings" are charming, emotional folk songs while others like "Somnambulant | Still" and "Clarion, Carillon / Carrion" are examples of droning anti-folk. Perhaps even more compelling are the songs that blend these two forms, having beautiful lyric and folksy guitar with noise erupting or droning seamlessly along side. Check "Not Just Angels" or "Shallow" to hear what I mean by this. A entertaining and lovely display of the power musical juxtaposition. Absolutely the sort of album that is most rewarding to hear from beginning to end with devoted attention.

Royal Blue Days has been released by Slenko's own Sioux Trails label, which has issued some really notable music including previously featured albums by Galápagos Finches and Glass Men. There is a bunch more on there I've been meaning to get to as well that look super promising and I believe they're all free to download.

Posted by Antarktikos at 5:28 PM