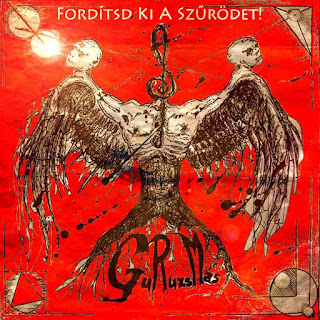 I spend a lot of time reading foreign literature in translation, I bring it up here often enough for that to not shock anyone. I really like to find it from Eastern Europe, I got stacks of writers from those nations I've yet to get a chance to read, but I always feel a strong urge to know more about it, to experience more of their culture. Therefore, I get a thrill when I see an Eastern European band has submitted an album. Some of them that I've posted over the years are still in my regular rotation and are among my favorites to share with friends. I can see this easily being what'll happen with this new full-length from Guruzsmás.

Earlier this year Guruzsmás released an EP, Az Élő Csizmaszár​\​The Living Bootleg, that I recall with great fondness. It serves as a wonderful prelude to this longer effort. Both showing the mutli-faceted nature of their compositions. They've pulled from a great many influences ranging from the traditional folk music of the Balkans, Ottoman territories and Eastern Europe in general to the more experimental expressions of rock and roll such as psychedelic and progressive rock, which let's not forget where hugely popular throughout Europe in the 60s and 70s. A notion visually reinforced by the album's cover art, an artistic perversion of the Byzantine imperial eagle. The songs are fast, polyrhythmic affairs, with familiar scales combined with loud, fuzzy guitars that would be equally at home in a heavy metal song. Even without a curiosity of their nearest of Easts like I've got, anyone that appreciates a superbly crafted progressive album will find Fordítsd ki a szűrödet! to their liking.