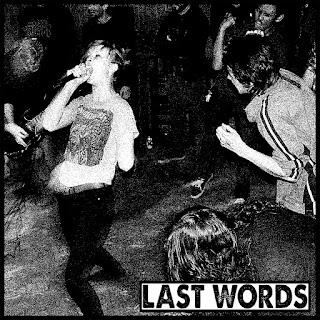 There's something truly wonderful about female-fronted hardcore music. Or is this powerviolence? I have no idea, as I'm clearly not a scholar on the subject. But something we might all agree on is that many rock music scenes tend to be fairly homogenized in the gender and race department. And let's face it... there's no shortage of machismo in the world. So excuse me if my ears perk to the sound of Marina's amazing scream... a voice takes this Raleigh, North Carolina's band to a whole new level of ferociousness... which would be entirely lost with a male vocalist. Her voice is that of a large hawk or like tires screeching to a halt. The band is also super tight, packing a wallop in a short bursts of mechanized synchronicity(most of the songs being under 2 minutes).

Last Words, I've read, take their influence from the Boston hardcore scene. I'm not sure what that means... something to explore in future posts.

10 songs, name your price. Available on vinyl! For the utilitarian music listener, a great record for the workplace (granted you have the luxury of listening to music while working)... especially if you daydream about smacking them. Also good for exercising.