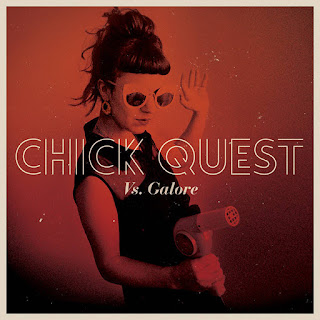 Here's a band from Vienna who's already begun to garner some attention from far more popular outlets than our tiny blog, however I felt the deserve all the mentions that can muster because it's very much the song of music I wouldn't mind hearing circulation more widely. Beginning as a two-piece called Van Lee Cliff, you know after the actor that played opposite Clint Eastwood in those legendary spaghetti westerns, and since then they've added more players while keeping the western's iconic soundtrack as an inspiration. However, western soundtracks is not the only, nor arguably the main influence on Chick Quest's full-length debut. More accurately the sound is that of a post-modern combination of a variety of revival styles from garage rock, surf, western and bass rhythms of dance-punk a la Gang of Four. It all makes for fine listening.

I feel I'd be remiss without mention by way of a footnote the Michigan musicians that release music as Lasso who has some of the same western influences and impulse to combine genres yet came out with a very difficult but complimentary sound to Chick Quest. So Check them out as well.

To be had here:
Chick Quest - Vs. Galore
Posted by Antarktikos at 7:10 PM