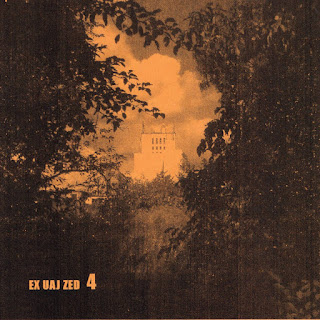 The last post was of a Hungarian band and in said post I took the time to wax on a bit on my fixation on Eastern European culture. After looking around a bit more thoroughly in the submissions I have noticed bit of an increase in bands from this region and so I suppose I will take this opportunity to share some of the highlights I’ve founds amongst them. So today is EX UAJ ZED of Poland.

I don’t know if anyone is calling their music garage metal, but if that’s not a traded term I should like to suggest it as an ample descriptor of EX UAJ ZED. Undoubtedly lo-fi with all its fuzz and striped down instrumentation it seems like a garage rock album, which is indeed what they billed themselves as. Yet there is no confusion in the use of overly powerful cords and intensity that this album largely expresses the angst and rage of the very best post-metal albums. Mainly an instrumental affair, with lyrics ever so scarcely entering the picture and even then they’re in what I assume to be Polish, so I can’t elaborate on their content. The real emotion of this album comes via the guitar playing, it takes center stage in every track, to such a degree that the drumming in delaying in introducing itself in several tracks. The drumming does serve as a wonderful guideline throughout, making what would otherwise be a guitar drone into a fleshed out composition, albeit of a minimalistic nature. Now, this might or mightn’t seem like your thing, but if you trust me insofar as lo-fi music goes I will say it is pretty good and I think they’re capable of producing a phenomenal album, and I need to spend time hearing the prior releases still. In the meantime I will really be heavily digging this one.