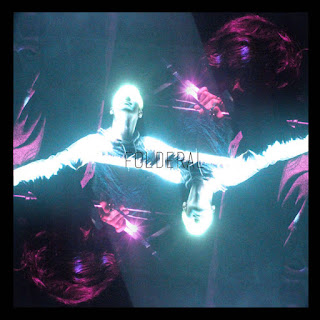 When I wrote of Nigel & The Dropout's previous album, Tumultuous, I mentioned how I only came to know of them from one of them firmly giving me a card with the band's name and the link to their bandcamp on it. It seems it worked so throughly they turned me into a devoted enough fan that I looked into if they had a new album out. Guess how pleasantly surprised I was to see that indeed they've got one out and furthermore that it is pretty damn sweet.

So in case you didn't hear their previous album, which I still highly recommend you check out, Nigel & The Dropout are a duo from Detroit that make electronic dance rock. So while I am the first to admit I truly prefer never to dance ever, not my preferred form expression (not shocking for a man who finds time to write a music blog), but I can tell this shit would be something to move around to. However, this isn't the case for every song. You see, the album has a considerable range. Tracks like "Gestalt" and "I am a Trampoline" are dance rock for sure, but the songs "Blood Brain Barrier" and "Pulled Over, Pulled Under" are far more ethereal to the point of becoming space rock-like. Still others fall outside this binary, being more droning and experimental. I can't decide which of them I enjoy the most, and regardless of which you fancy best I am sure you'll like Folderal.

To be had here:
Nigel & The Dropout -  Folderal

Posted by Antarktikos at 8:26 PM