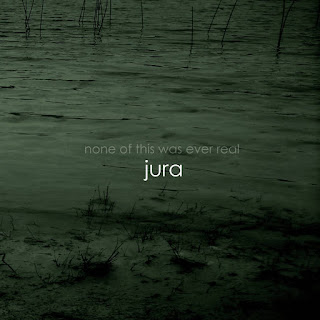 So I am a bit of a shitty friend. My pal Frank (aka Frankomyalgia) gave me this album to hear as soon as him and the other lads in Jura finished their years long mastering process. Then I put in the queue without special treatment. No reason why other than absentmindedness. However, I'll say that my personal fondness of Frank 'n' Beans aside, this album deserves to have been kicked up up in the line. Shit's fucking tight, professional-ass-tight. So with my apologies, Frankadoodle-do, I final am delivering my write-up.

None of This Was Ever Real is a largely instrumental and entirely enthralling album. The songs have a shimmery quality to them, along with a mild shoegaze droning in the background that lays an excellent bed of sound to build on. At the few moments when vocals appear, they are subtle, echoey and don't step on the music in any way. Rather the blend seamlessly into the tapestry. Moreover, there are no spoken word audio sample interludes, which can be used well but are often over-employed as the expense of good songcraft. It not only sounds Jura like the took their time meticulously picking over the audio of these tracks, I know they took their sweet time putting it out. A labor of love in every note and it is audible. Most impressive, Frankincense.

Finally, until most bands I write-up, I have gotten to see Jura play live. I haven't a clue if they're going anywhere to play any shows, once again I am not a great friend and should have asked Sprained Frankle about this.

To be had here:
Jura - None of This Was Ever Real