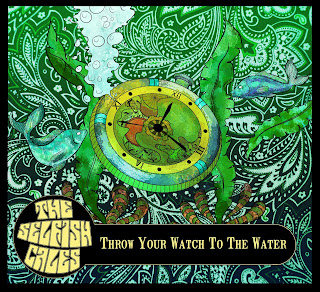 I'll skip the apology for not posting for a bit. I just burnt out, and that is gonna happen from time to time. Was feeling burnt out all around for a bit there, even in my attempts to have a conversation seemed like I'd just revive the same few jokes my mind could summon before I could manage to scurry off. Feeling better now, and I am wondering what made me think of those particular jokes and conversation pieces when I was run down, why would I go back and revive those ones of everything I recall? That got me thinking of why we revive any notions from the past when we do? Why do we keep going back to certain styles? I am still not sure why, but I have a prime example to share with you today.


Revivalism is still going strong in Italy. Here again we've got an Italian band that'd pass easily for a British or American psychedelic-garage band from late 60s. This might seem vaguely familiar, perhaps because of other fairly recently posted Italian outfits like the Plastic Man, Big Mountain County, and most similarly the Vickers. However, the Selfish Cales aren't mimicking a British accent to the degree the Vickers are. In many ways the sound like a indie pop band from Athens, GA bearing a heavy 60s psych influence, noticeable in the groovy guitar hooks, the most excellent deployment of the organ and use of Eastern sounds not unlike the Beatles. At moments the album features some proto-disco beats, like one of my favorite Beach Boy's albums, Wild Honey. In fact, the whole affair bears some likeness to that fine album, admittedly more fuzzy and bombastic. The Selfish Cales are retro to be sure but it doesn't seem to prevent them from being engaging.

To be had here:
The Selfish Cales -  Throw Your Watch To The Water
Posted by Antarktikos at 8:30 PM