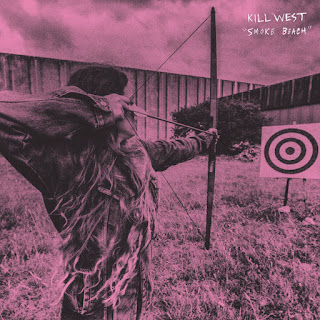 To the attentive follower of this blog a few things about this album will be quickly familiar. Beyond it being a lo-fi psychedelic rock album, which is such a normal thing for me to write these days it is competing with my signature for top motion memory, it should be that they've been featured in an EP Grab Bag previously, but also that this album is released via the indie label/music blog Ongakubaka. And if you were really paying attention you'll recall that Ongakubaka doesn't put out shitty albums. Like never. Just don't know how to, I suppose.

The lo-fi outfit known as Kill West are from Buenos Aires. They seem honed their sound from what I recall hearing on their self-titled EP, shedding some of the more garage and surf sounds for a more dreamy style. That said, Smoke Beach is exactly what I hope for out of a hazy psychedelic rock album. It has enough droning/shoegazing elements to provide a fine trace-like quality for the listener while maintaining enough energy and bursts of excitement to not be able to fade from the forefront of one's thoughts. The nailed it, plain and simple. I'm not afraid even at this early date to call this one of the best psychedelic albums of the summer.

Finally, I can't think of a better way to celebrate the United State's Independence Day than by continuing to read Uruguayan writer Felisberto Hernández, drink Spanish and German wines and listen to Argentine rock and roll. Really making the most of globalization and modern American imperialism. So get drunk, shut your mouths and open your ears up.

To be had here:
Kill West - Smoke Beach

Posted by Antarktikos at 3:12 PM