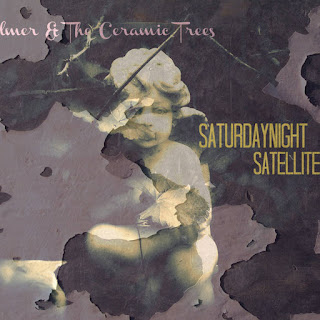 My coworker recently turned eighteen. He's a bright kid, someone with a lot of potential. Someone who should do more than drunkenly type up musing about songs on a blog and work a series of retail jobs like yours truly. I remember what it was like to be eighteen, wishing someone give me even the slightest of pointers in what is worth learning about and what culture will expand my horizons. I feel by default into plumping the depths of the internet for music and only later by happenstance of becoming a bookseller did I gain a love of literature. I gave him copies of The Stranger by Camus and a collection of Rimbaud's poetry hoping I wasn't dooming him to the depressive existential bouts I sometimes experience. Gotta learn that too though, I suppose. Nothing better to work through them than a musician expressing their gloomy mood in a most beautiful way.

The Wisconsin songwriter Robbie Haas, going by the lovely moniker Elmer and the Ceramic Trees, is just such a musician. I'm not gonna beat around the bush here. SaturdayNight Satellite is a magnificently composed album. It doesn't hold too tight to one genre, and the amount of production on the tracks varies considerably from stripped down folk-type songs to multifarious post-punk. Bears many of the features of sadcore bands like Great Lake Swimmers, Fred Thomas's Flashpapr and the more dejected tracks of The National. Though I can get why one might the sadcore tag, sounds silly. Add to that some gothic country twang, liberal use of a piano and deft application of the wall-of-sound, you'll end up with a better idea of Haas's astute approach. SaturdayNight Satellite's title track is fine place to begin as it's a long, melodic and varied exemplar of the interwoven aspects with which he's working. Outstanding songs are the noisy "Winterlong," the guitar-driven "Evening Prayer" and the comparatively pop-like  "The Way We Fall." Nevertheless, the morose "Take Me Drain Me" and "Gentle Hand" are more poetic, reminding me of the aforementioned sad literature I'm so fond of sharing.

To be had here:
Elmer and the Ceramic Trees - SaturdayNight Satellite
Posted by Antarktikos at 9:57 AM