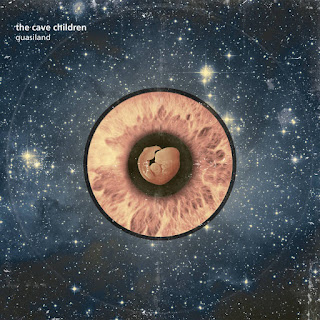 Always a pleasure to get music from Greece. That country really has a lot going on and we hear too little of it, though that can be said of many countries in Eastern Europe. All the more reason to get my shit together and make some more Scence of a City posts. In the meantime we've got the Cave Children.

Received this album a little while ago and have actually listened to it several times yet somehow it kept getting neglected when I sat down to write posts. So while I've been holding it back unnecessarily, the additional listens makes me feel more confident in how I regard Quasiland. The Cave Children are hard to place genre-wise, although psychedelic and progressive rock have undoubtedly had a clear impact on them. The songs are all over the place from flashy rock filled with quick guitar to spacey effects combined with dreamy singing. They cite "Danny Elfman, The Beatles of 1969, Frank Zappa’s sarcasm" as influences. Weird, right? The description seems chaotic yet when heard you'll find the direct contrary is true. These tracks are remarkably cohesive and well-produced. It is really the sort of album to turn on and try to go about doing your thing only to find yourself pausing at all the curiously interesting sounds.

Quasiland was released by the Greek indie label, Inner Ear. They've got a spiffy website where you can order vinyl copies of the albums they've issued, or you can just use bandcamp I suppose.

To be had here:
The Cave Children - Quasiland