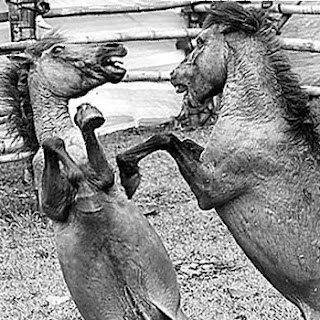 In a city with so many musicians, it's surprising how uniform the music can sometimes feel. The venues, who only seem interested in booking indie/garage/punk bands, get the lion's share of blame. But, truth be told, so are the people that go to those venues ...those who'd rather feel their adrenaline surge than have their ears and, whatever's left in-between them, stimulated.

This is why Roselit Bone, who play minimal gothic country with twinges of punk, are kind of a Portland anomaly. They often find themselves playing to these crowds and the audiences are usually more polite than ecstatic, which is a shame because this duo is something pretty special.

Here's a live set they recently played in downtown Portland at a tiny venue called the Ella Street Social Club. One of the first things you'll notice is frontman Josh McCaslin's forceful, bellowing vocal delivery as he spits lyrics like "there are figures in the shadows of the seeping mist, that find you choking on your sorrows and the smell of piss". On other songs he's the opposite of this, crooning melodically over guitar lines that hint at Josh's skill at the instrument, which is most apparent in the ballad "My Coward Heart", a mellifluous song about the yearnings of a parasitic love. The crooning continues on the song that shares the band's name, where we're transported to a tragic scene as war has exiled a couple, "love me like you love the ocean, love me like you love the open sea, there are horses on the road and my legs are weak, love me, and stand up to meet them".

This is not your bubbly, teenage love note … this is some epic shit.

Lyrics go on to weave images of desperation, death, and self-loathing. The songs are dark, but aren't completely without optimism. In the fantastic closer, "In My Egg", the narrator sees a pitiful old man crossing a bridge and thinks, "I hope I am not him one day, and that I still find some beauty - in the yellow lamplight of decay - in a dirty, rainy city." Well, maybe that's not very optimistic... but, as Anne Frank said, "Where there's hope, there's life."

Roselit Bone play around with folk and country traditions but inject it with dust, blood, gasoline, and tears. It's loud and rageful, it's quiet and solemn … it's probably one of the few bands, not just in Portland but in any city, keeping the flame of the oil lamp lit for this musical style and I cannot urge you enough to give them a listen.

Posted by Amazing Larry at 7:58 PM