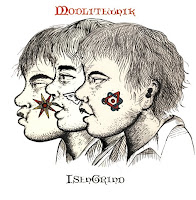 Sorry about the absence, I was doing nothing important but I couldn't summon the will for posting nonetheless. Tell you what I did do was look at the neat stats thing that google has built into blogger so I can tell what are the most commonly looked at pages, and while I am sure that is warped as all hell from the layout, one thing is clear. People like Natural Snow Buildings so I decided to get off my duff and not put off getting the solo work for the two members that much up that wonderful French duo. Isengrind is the moniker that Solange Gularte has chosen for solo releases (Mehdi Ameziane does so as TwinSisterMoon and I'll likely have some of that up soon). Musically it is in the same ballpark as Natural Snow Buildings: ethereal, droning, and psychedelic. Modlitewnik invokes memories of Joose Keskitalo, Paavoharju and other Finnish experimental folk projects for me. Shares many of the qualities that I find appealing about the Finnish, but doesn't just mimic. I've been listening to this all morning as well as last night, so hopefully TwinSisterMoon is just as good and I am in for a treat.
To be had here:
Isengrind - Modlitewnik [192 VBR kbps]
Posted by Antarktikos at 10:28 AM